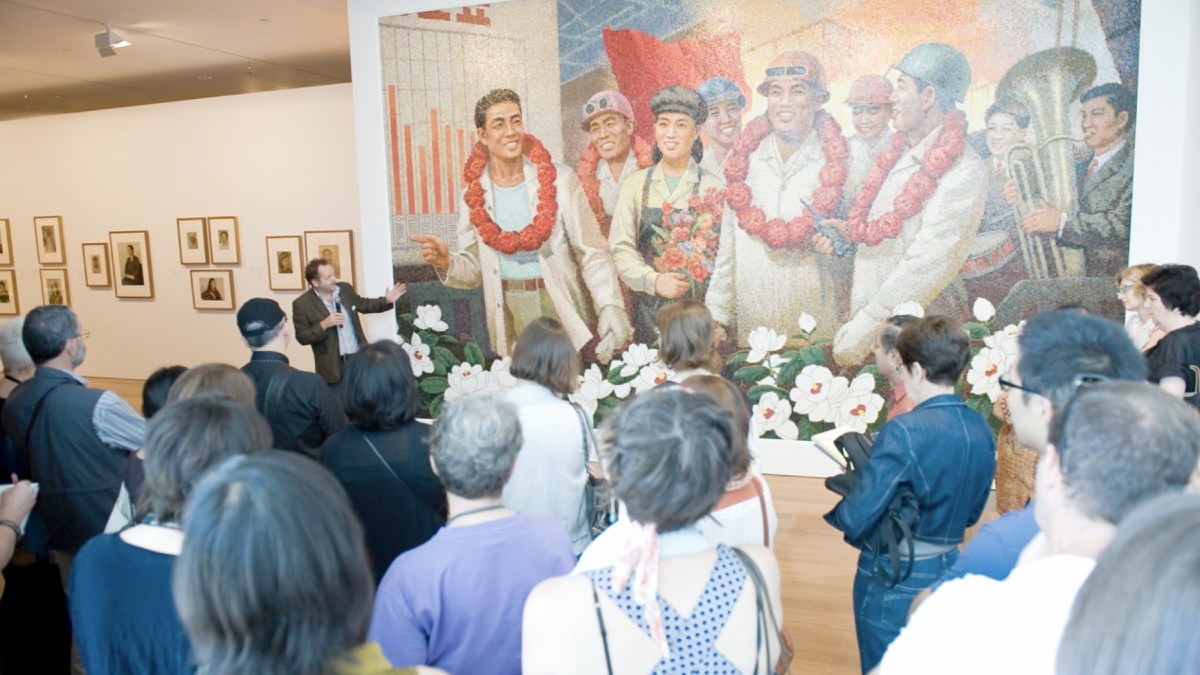 August 2020
The following is a redaction of a paper by Suhanaya Raffel on North Korean mosaics.

Nicholas Bonner (Koryo Studio) and Suhanya Rafale (Gallery of Modern Art, Brisbane) co-curated the DPRK submission to the 6thAsia Pacific Triennial. As part of this body of work they commissioned a large-scale, vibrant mosaic ‘Work team contest’ by North Korean artist Kim Hyung Il for the Contemporary Asian Collection. Technically virtuosic and monumental in scale, it is a striking group portrait of workers at a steelworks foundry in the Democratic People’s Republic of North Korea (DPRK).

The DPRK has maintained a unique political autonomy in the region due in part to the collectivisation of its work-force and because of the enduring authority of the Juche(1) ideology, established by the founding leader Kim Il Sung and sustained by the current leader Kim Jong Il. The proposed acquisition, ‘Work team contest’ draws on both the political and visual languages of Korean culture to convey the nature of work, the value of workplace productivity and the importance of the collective unit in the DPRK.

Most murals and public sculptures in the DPRK today are produced by government run art studios and adopt themes of great and often overt narrative power. Two of the main art studios in particular (one under the military and one which was under the wings of Kim Jong Il) are credited with the major mosaic and sculptural works in Pyongyang and various revolutionary sites around the country. Common themes range from political imagery, industrial growth, military strength and historical conflicts such as the Korean War and the Japanese occupation. Kim Jong Il is noted for having said ‘if the people who see a picture cannot grasp its meaning, no matter what a talented artist may have painted, they cannot say it is a good picture.’(2) This sentiment is reflected in many of the works which function as a form of public art. The scale is typically massive and stylistically owes much to the social realism style of revolutionary art seen in the Soviet Union, China and Vietnam. (3) Installed in urban spaces, stadiums and official buildings, these public artworks function also as a logistical apparatus, which echo the values and principles inherent in the politicalrhetoric.

Mosaics are not a traditional form of Korean art (4) however the dramatic colour palette, realist imagery, and didactic themes sit comfortably within Juche philosophy. Mosaics are integral to both the facades and interiors of many buildings and are included in the initial architectural design, often portraying scenes relevant to the building’s function, for example the Grand Theatre mosaics depict scenes from Revolutionary Operas, and the façade of Kim Il Sung Sports Stadium features a mosaic of victorious athletes.

In a country with extreme variations in climate, the robust and resilient tiled surface is conducive to the installation in outdoor locations, where images depicting the leaders are common, for example the image of Kim Il-Sung as a young boy at his birthplace in Manyongdae.

Monumental in scale, and dazzling in their technical accomplishment, these vast back-drops communicate educational messages about nationhood and unity and are visible for the whole of society – on buildings, in thestunning platform lengthmosaics of Yonggwang Metro Station, and in the countryside.

Mosaic murals have been avidly adopted as an important format for historical narratives and both their production and display require mass participation. What is interesting in the making of these works and their subsequent placement in the public realm is the acknowledgement of the role of artists as important collaborators in the construction of social knowledge. Within the accepted limits of artistic representation, artists in the DPRK are agents in communicating and reinforcing a work ethos and a parallel social order.