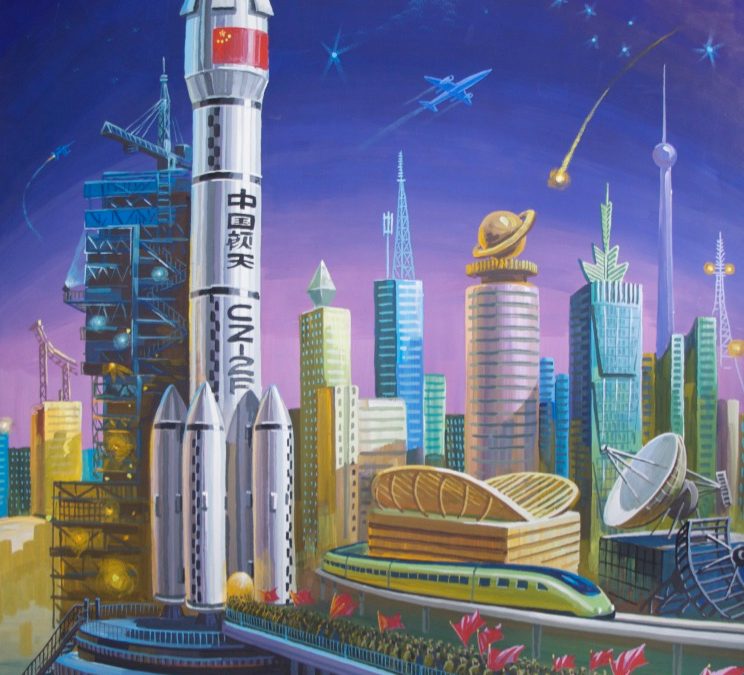 ‘City Migration’ is a piece from the Beautiful Future collaboration between Nick Bonner of Koryo Studio, Dominic Johnson-Hill of Plastered 8, and a group of North Korean artists living in North Korea’s capital Pyongyang.

The rocket in ‘City Migration’ is based on the Chinese images Nick and Dominic gave the Koreans. However, the subject matter is not new to them.

Satellites, rockets, and missiles are synonymous with North Korea. Their development is used as internal and external propaganda to demonstrate the country’s capabilities. So, this subject matter certainly won’t have been new to the North Korean artists. However, the application of it may have been.

The refurbished Mangyongdae Schoolchildren’s Palace in Pyongyang recently replaced its copy of the space shuttle with a version of its own 1998 Unha-3 rocket.

However, the city buildings have a retro-futuristic look which is almost a precursor of Mirae Street in Pyongyang. This street was built in 2015.

The Following Prints Are Available: