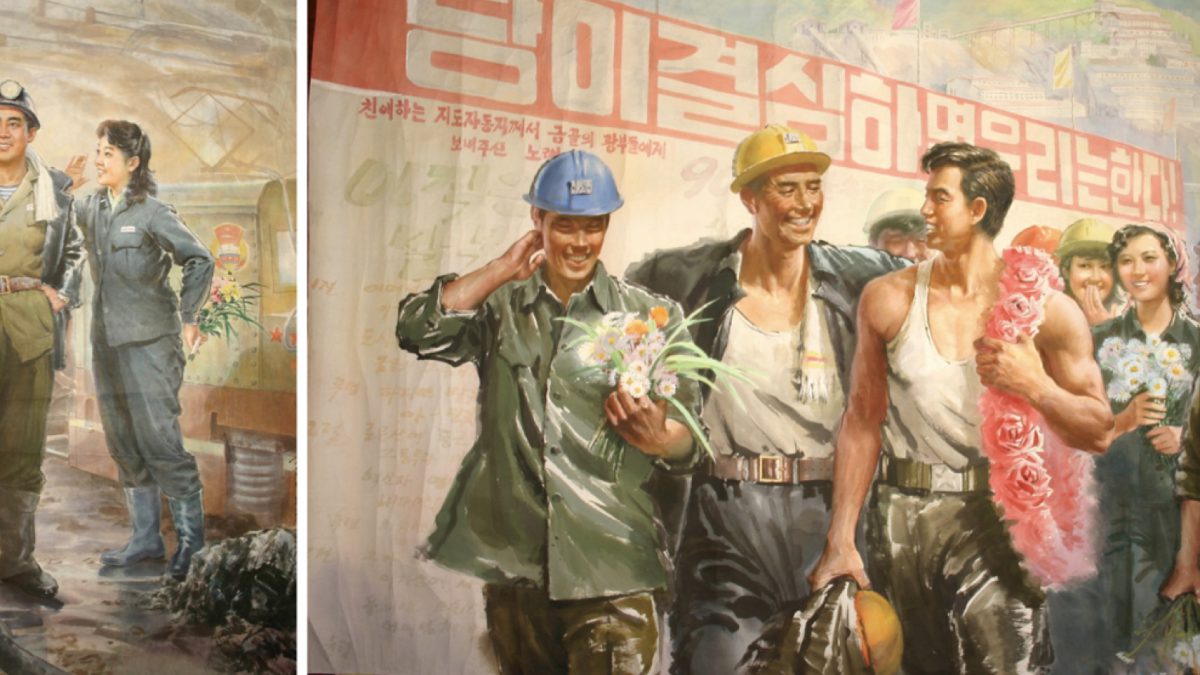 Two Mine ink paintings (Juchehwa) from the 1990s, exhibited in National Competitions and in the Koryo Studio collection. Both artworks reveal two common traits to be found in North Korean socialist realism.

Left: The narrative is supported by the text “Kim Yong Chol Succeeds in High-Speed Drifting”.
The tag on the male reads “Occupational Health and Safety”.
The locomotive proudly bears the DPRK emblem, to reinforce the fact it is made in the country

Right: The slogan reads “We Do What the Party Decides!”

These Mine in painting artworks are a piece of theatre with props and other visual clues. These all have a function to make the message clear, Meanwhile, the protagonists play their part to show that if you work hard to fill quotas you will live a happy life.

The artist has constructed the artworks to show the respect the young miners are getting from their elders. And in Korea, this is important. Perhaps a vestige of a Confucian past, but certainly in contemporary Korea paying respect to elders is of utmost importance. So for them to pay tribute to you is an honour.

The Mine ink paintings are ‘team’ celebrations. But, they both focus on the adulation of an individual. Individual heroes from the proletariat are found throughout North Korean Socialist Realist paintings. Whilst the paintings embody the spirit of the individual will be directed towards collectivist ideals. The paradox is that the art venerates the individual. Perhaps in a work unit, the individual is allowed to show the way forward.

“A picture must be painted in such a way that the viewer can understand its meaning. If the people who see a picture cannot grasp its meaning no matter how talented its creator, they cannot say it is a good picture.”

The miner in the underground scene strikes a heroic pose, what we would see as slightly affected. Whereas the chap in the artwork of the team outside the miner in the singlet is shown all muscles. Nevertheless, both are sure-fire winners in the eyes of their girls.

Whilst these paintings show the success of the individual and the team it is clear there is a sensual angle. Perhaps this is to make the paintings appealing to a younger generation. This is a painting clearly made to show a bit of passion, giggles of the girls whispering to each other about how good-looking these men are, rather than how he has fulfilled his task.

The artist expresses himself in a lyrical way by contrasting the burly man in the blue safety hat with a bunch of delicate flowers. However, reveals in his expression that he is clearly touched.

Both paintings demonstrate individual/group sacrifice where the reward may not be in the financial sense but it certainly is for kudos. During our filming of the documentary A State of Mind, our interview with one of the protagonists Hyon Son revealed a rebellious independent streak as a young girl. She had played truant from school but after being caught her parents and teachers brought her into line “I learnt to sacrifice myself for the group.”

We commission North Korean artists to produce works outside the confines of their studio briefs.