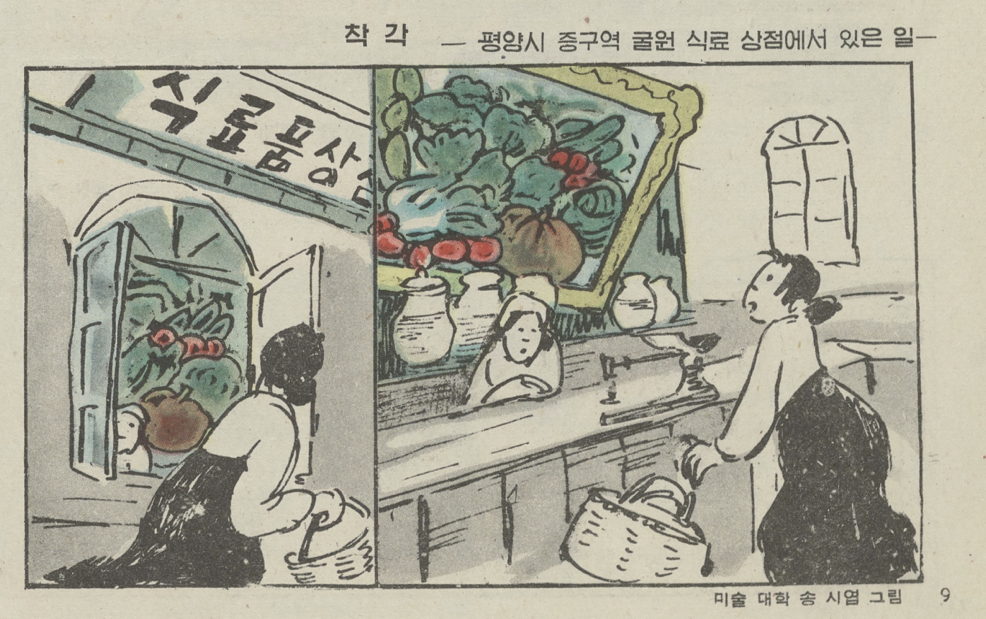 The Library of Congress (LOC) in the United States has digitized part of its collections of North Korean commics. This is an excellent resource for those interested in learning more about North Korea, especially during the Covid-19 Pandemic.

Among these serials is the The Arrow(화살), a monthly cartoon pictorial, which stands out from other North Korean publications, past and present, for its colorful artwork and satire. While The Arrowis an example of state-sponsored propaganda and, indeed, many of its pages are devoted to criticism of the United States and “puppet regime” in South Korea, it is, at times, humorously self-reflective and critical of North Korean society, especially by today’s standards.

The LOC has digitized monthly editions of The Arrowbetween March 1953- September 1964. We have yet to explore the entire collection but want to share with you a few cartoons which I found surprising as frequent visitors to North Korea.

Me and my arrow

Wherever we go, everyone knows

It’s me and my arrow.

The 1959 cartoon “An Occurrence at Kulwon Foodstuff Store of Pyongyang’s Central District” humorously depicts a situation which many recent visitors to Pyongyang claim to have seen (but probably actually haven’t).

In the past, discrepancies between the goods stores promised to carry and the goods they actually carried (or what was available to buy) seem to have been large enough to literally draw criticism of Koreans and make foreigners wonder if these stores were anything but showcases. Nowadays the importance of the cash economy means stores are more focused on making a buck rather than doing things for show.

While North Korea today may be more receptive to capitalism, it has become less receptive of the satirical cartoon. Today, criticism of societal trends, like the consumption of foreign media, are more likely to be targeted by bland newspaper editorials or internal directives.

2. For better or for worse…

Marriage doesn’t always live up to its promises no matter the society. North Korea is no different – for a fictionalized account of a North Korean marriage on the rocks, see Friend (1985), translated into English by Professor Immanual Kim in 2020.

In 1959, cartoonist from No. 13 Middle School in Songjin (today’s Kim Chaek City) in North Hamgyong identified a possible source of matrimonial discord.

Prior to marriage the man proposes: “Let’s live in cooperation with each other.”

After marriage, it is the woman doing all the work with a crying child strapped to her back. Meanwhile, the husband sits by smoking and reading a newspaper about Communist values, in theory rather than in practice.

For example, it is said that Pyongyang mothers often fear their sons falling for a woman from North Hamgyong. Hamgyong women are traditionally thought to be among the most beautiful in the peninsula, but who are also known for being tough. Before marriage, North Hamgyong women are said to be stunningly beautiful and charming. After marriage, it is said they dominate and take total control of their Pyongyang husband’s lives.

In Vasily Grossman’s Life and Fate(1958), a character asks: “Does life have a meaning? Does Soviet power exist in other galaxies?”

In April 1957, a North Korean artist imagined aliens in space observing Earth shrouded in a ring of fabric with a telescope, just months before the launch of Sputnik.

“What could that be around the Earth?” one alien asks.

“Well, it should be the cotton fabric produced last year by North Korea.”

Although North Korea still produces science fiction today, depictions of alien life are relatively rare. This is not to say alien life is beyond the North Korean imagination. Indeed, in 2015 Koryo Studio collaborated with North Korean artist Kim Kwang Nam on “The Future is Bright,” inspired by shared nostalgia for the imagined future of the 1950s and 60s.

4. A Visit from the West

Today North Korea propaganda stresses “Self-Reliance.” Things were different in the 1950s when North Korea received aid from friendly socialist states, such as the USSR, China, and East Germany in its efforts to rebuild the devastated country after the Korean War. China stationed troops in North Korea until 1957 to assist with defense and post-war reconstruction.

This 1956 cartoon depicts a Korean crane operator welcoming the Monkey King, Sun Wukong, from the Chinese classic Journey to the Westto Pyongyang as he appears riding in the sky on a cloud. The Monkey King holds a bouquet with a ribbon reading “Chinese Art Troupe Visits Korea”

The crane operator proclaims: “Sun Wukong! We warmly welcome you with an extraordinary talent, bravery and indomitable spirit.”

“You are welcome to say so… but the reason I came to Korea was to deliver these very words to you,” the Monkey King replies humbly.

A note below explains that the Chinese art troupe visited Korea to provide consultation to the Korean people and army.

Today, North Koreans still know the Monkey King through Chinese television productions and appreciation for the Chinese Classics, which also include A Romance of Three Kingdoms and Dream of the Red Chamber. In 2010, the North Korean Sea of Blood Opera Troupe (피바다가극단) produced a musical adaptationof the latter.

In an essay called “The First Socialist Tragedy” (1934), the great writer Andrei Platonov lamented an incident he observed among the Soviet intelligentsia in which a man did not see the value in a woman because she was plain looking.

In 1957, an employee of the Hungnam Fertilizer PlantReading Room, Kim Tae Il, noticed a similar bias for beauty at the expense of others in society.

While the beauty bias probably never really went away in North Korea, we can imagine this scene from 1957 being repeated today following the rise of conspicuous consumption over the past two decades, especially in Pyongyang.

To someone who has spent time in North Korea and among North Korean documents, The Arrow is both intimately familiar and strangely alien. Today, the country’s propagandists are as prodigious as in the 1950s and 60s, if not more so. In many cases, their message remains the same, such as the condemnation of America as an imperialist invader and South Korea as a “puppet regime.”

Yet, North Korean propagandists have, for the most part, abandoned the cartoon as a form of direct social commentary. Cartoons are more likely to appear in textbooks, children’s and young adult literature. If critical at all, these cartoons usually take on issues from Korea’s past, like the greed of landlords in the days of yore. Even in today’s North Korea, where efforts have been made to spruce up the appearance of visual media, the cartoons in The Arrow seem visually out of place. One can only imagine which topics North Korean cartoonists would take on today, if the socially critical cartoon made a comeback.

James Banfill is a former staff member at Koryo Tours. He runs the Old Pyongyang Post on Twitter (@Old_Pyongyang) and Instagram (@theoldpyongyangpost) on the history of pre-1945 northern Korea.

The Library of Congress’ digital North Korea Serials Collection can be found here.