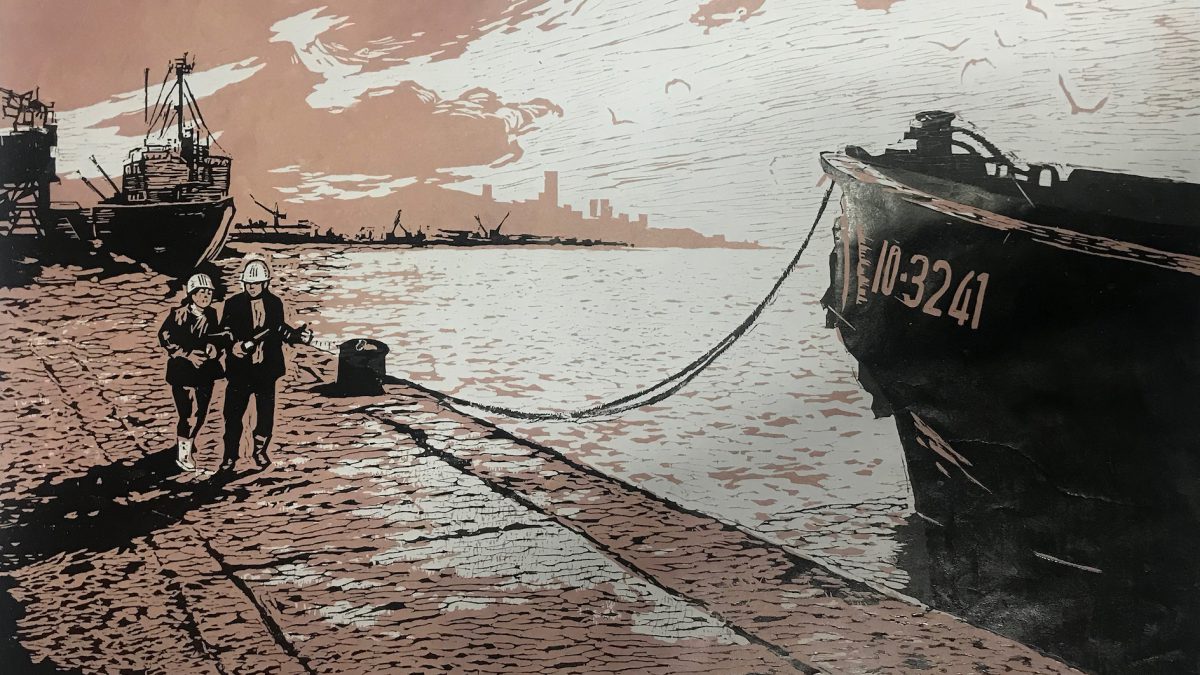 THE LINOCUT - Port at Night

The Port at Night two colour inked linocut maximising the play of light.  The focus is on two engineers, the man holding a walkie-talkie and the woman what looks like a roll of plans.  The location is on the east coast city of Wonsan which can be seen in the distance, and the light falling over the harbour would therefore make it morning. The piece is however named ‘Port at Night’, unfortunately, it will remain a mystery, Hwang In Jae became unwell soon after this commission and it was the last time I saw him before his death in 2015.

Hwang contrasts the black bulk of fishing boat Number 10. 3241 both by light (surrounding it in an open sky and reflected light on the sea) and in physical cuts in the linocut (the small delicate details against the mass of the fishing boat).

The linocuts were one part of the project ‘Ship Building’ that I commissioned in 2011. The full body of work was almost completed (inks, oils, linocuts) but because of an internal problem the project was cancelled at the last moment. It was reminiscent of a previous commission

The only work we managed to get out were the Hwang In Jae linocuts. Around 6 years later I was offered in Beijing some of the artworks which I had not seen since walking around the studio with the artists. Not only had we lost a large sum of money for the commission I was now being asked to pay for the work again. Needless to say, I refused, but it still torments me, the works that were produced were remarkable and may never be seen again. I could not track down the work and it was all hushed up. The exhibition I had worked on for two years would never take place.