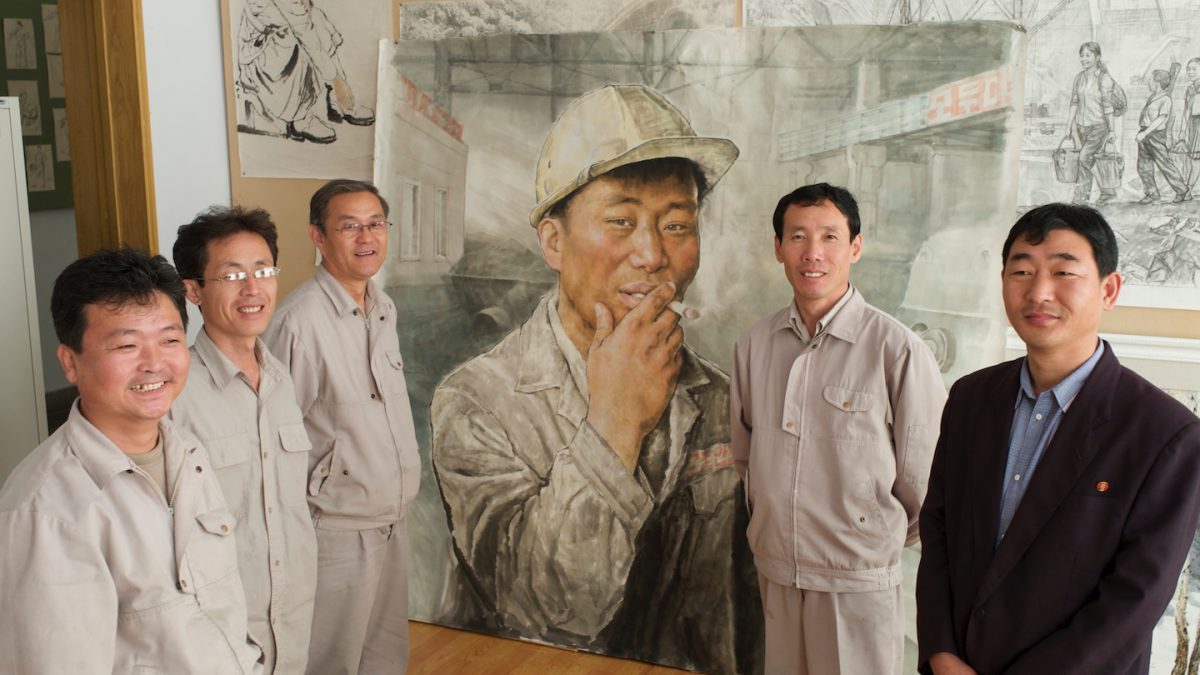 North Korean artists not welcome, their 'propaganda' is

We can see the product of their labour – more than 60 works, ranging from the heroic to the humble are on display at the sixth Asia Pacific Triennial in Brisbane until April. But the North Korean artists who created the works have been banned from visiting Australia – not by the reclusive North Korean regime, which gave six of them the all-clear to travel to Brisbane, but by the Australian Government. The reason? North Korean nationals are forbidden from visiting Australia because of their country’s missile and nuclear weapons programs. To make an exception for these artists ”would have sent an inappropriate message to the North Korean regime”, says the official statement by the Department of Foreign Affairs and Trade. And then there’s the ”incidental” issue of their art. ”The artists concerned are from a studio that operates under the guidance of North Korea’s leader, Kim Jong-Il. The studio reportedly produces almost all of the official artworks in North Korea, including works that clearly constitute propaganda,” the statement says.

”That’s just the most stupid thing I have ever heard,” counters Beijing-based British filmmaker Nicholas Bonner, who for the past five years, alongside curators from the Queensland gallery, worked with eight North Korean artists from the Pyongyangs main art studio on the exhibition. The studio is under Kim Jong Il’s guidance, but the gallery and Mr Bonner worked directly with the artists – it was a collaboration between two art institutions, Mr Bonner said. Fifteen of the works being shown in Brisbane were commissioned by the Queensland Art Gallery – indeed, one of the works, a large social realist mosaic mural, has been acquired by the gallery.

”It’s massive censorship,” Bonner said. ”What are you so paranoid about? It’s like being back in the Bush years. I could understand such a response three or four years ago but, for goodness sake, as a Labor Government you should be more for the people,” Bonner said yesterday.

Essentially, the North Korean artists have become pawns in the international stand-off between their Stalinist regime and the Australian Government – and the incident has attracted the attention of the international media, including BBC radio and The Times online.

The Queensland gallery and Bonner have not shied away from the social realist elements of North Korean art – the first work that audiences confront is the revolutionary-style mosaic mural. After the North Korean artists were banned the gallery had to find a mosaic specialist capable of assembling the grout-free work. The placement of this mosaic is deliberate so that audiences can see the radical departure from the state- sanctioned style that comes in later works, such as Im Hyok’s Breaktime. Bonner and Queensland gallery curator Suhanya Raffel encouraged the North Korean artists to create more ”truthful” depictions of their lives, although they could not use the word ”truth”, asking, instead, for more ”humble” depictions.

Sixty artists from the Asia Pacific were at the opening of the triennial this weekend, giving talks about their work. ”Our wish was that the North Korean artists had also been given that chance. But the Federal Government didn’t enable that and we have to respect their decision,” said Queensland Art Gallery director Tony Ellwood.