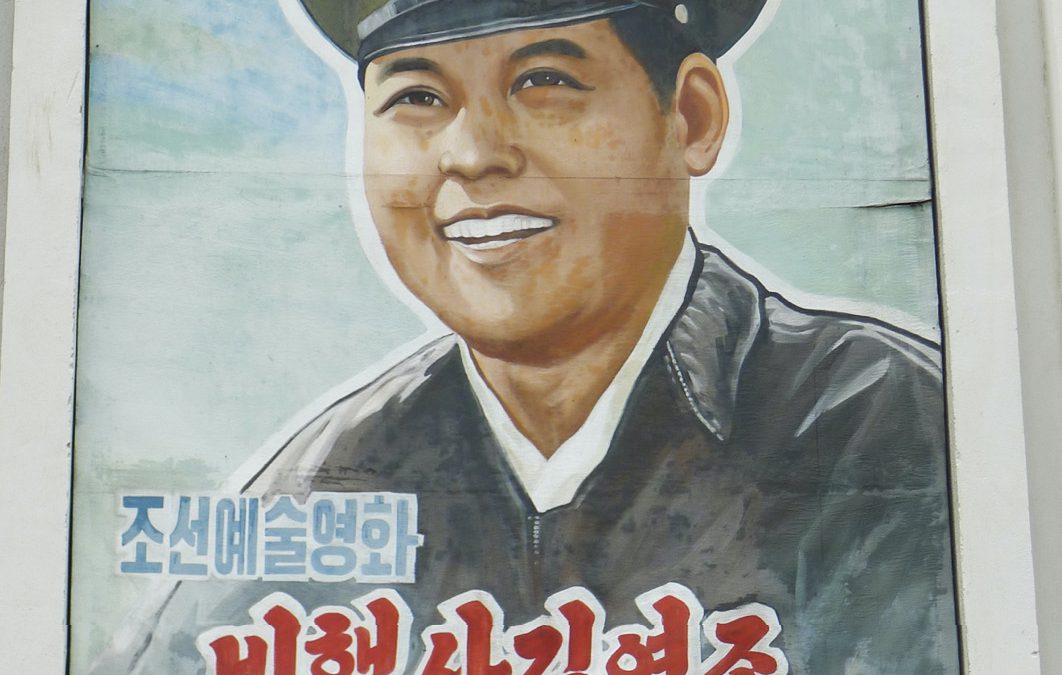 The Art of the North Korean Film Poster

For the 25 million people that make up the population of North Korea, film is the principle medium by which they learn popular history. The posters (either printed or hand painted) along with the films find their way to every conceivable corner of the peninsula – from the rural cooperative farms to the metropolis of Pyongyang. To the uninitiated viewer the film posters create usually two reactions: amusement at the quirky designs and mild alarm at the forthright patriotism- the posters are loaded with allusions of filial and national obedience.

Film posters represent a collaboration between art and film; the graphic artist encapsulating the director’s work as a still object. The importance placed on the artistic merit of the film poster can be demonstrated by the fact that the film studios in Pyongyang have their own graphics department responsible for the final poster. The artists follow the shooting of the film, develop sketches and themes and after approval from the film studio the poster goes into production.

Early posters were printed by offset-lithograph process from a hand painted gouache original with the composition varying from a focus on the lead actor to a montage of characters and scenes. More recent posters rely more on using film stills and computer graphics.

Posters for internal use will be printed for promotion at factories, shop windows, metro etc. Elements of the poster may be recreated as large hand-painted posters on various paper sections and pasted onto the cinema billboards, (most cinemas have a prominent ‘frame’ on the cinema facade made for the local artists to copy and enlarge the key elements of the poster).

Each film has a ready-made mass audience due to the very small number of foreign films that make it to Korean screens and the wide-availability of cinemas in the country; from the capital Pyongyang all the way down to the co-operative farms that dominate the countryside. Interestingly cinemas only open during daytime – permission is needed from work to go and watch the new blockbuster. Whilst television series have gained mass audiences the release of a new film is still a major event (around 3 or 4 films a year, much less than the 1970’s -1980’s heyday) …and it is the film poster that arrives in the vanguard.

Posters made for distribution of DPRK made films to a non-Korean audience tend to be on better quality paper, initially for film festivals in fellow socialist countries and other members of the non-aligned movement. The artists treat the English or French text like the Korean characters- expressed with creative flourishes aimed at capturing the spirit of the film) and more recently for exposure to the world festivals and markets.

Although not well-known abroad, the DPRK does have a stable of actors and actresses who could be considered ‘film stars’ and whose latest performances are eagerly awaited by their fans. In addition to being portrayed on film posters they will often feature in the yearly film calendars produced in DPRK for domestic and international promotion. Many of these men and women have achieved the ranks of People’s Artist, or Merited Artist, the highest honours available to those who work in the artistic fields in the DPRK and a signifier not only of thespian talents but also of their ability to use their craft to express the principles laid out in ‘The Art of the Cinema’ and to bring the message of the films clearly to the audience. In North Korea the films stars are also recognised – everyone in DPRK knows Ri Yong Ho who played the lead in the martial arts adventure Hong Kil Dong

and actresses such as Hong Yong Hui who plays the tragic lead Ggot Bun in Flower Girl.

DPRK leader Kim Jong Il’s book ‘On the Art of Cinema’(1973) is the seminal work on how to make a film in North Korea. Equal parts filmmaker’s manual and work of socialist philosophy, the importance of this single publication on the entire film industry for the country since the 1970s is impossible to overstate.

Thematic elements that all films should contain, as laid out in the book, are present in all North Korean films; such as representing the class struggle, and glorifying the ruling Workers Party of Korea, either as an explicit statement or represented through allegory.

The book is an interesting reading experience, fitting of course for someone who, prior to his appointment as supreme leader of the nation, was tasked with overseeing the creation of all cultural products made in North Korea; from revolutionary operas to popular music and, of course, feature films and television productions.

With the foundation of the Democratic People’s Republic of Korea on 9th September 1948, the newly independent state moved swiftly to establish a film industry which has consistently released movies on a variety of themes.

The first feature film produced in the DPRK was ‘My Home Village’in 1949, the only film made that year at the newly established Pyongyang Film Studios. As well as the Korean Film Studio there are separate film studios for documentary film making, animation and even a military film studio owned and operated by the Korean People’s Army.

Variety of films is somewhat limited, in 2008 the DPRK studios produced five feature films on 35mm, four covered military themes and only one in the social genre; ‘Kite Flying in the Sky’and sadly nothing much has changed. In 2018 the Studios were instructed to produce films for entertainment (this follows the success of ‘Comrade Kim goes Flying’ which was the first DPRK film made for entertainment and officialy release as such) and since 2019 a thriller has been in the pipeline, event shot, but not as yet released.

The film posters are largely forgotten with the film but in a few cases the artwork itself becomes an icon. Notable examples are the original imagery of‘The Flower Girl’with Ggot Bun embracing the flowers and more recently‘Soul’s Protest’ (providing a reminder of how the Koreans see the aggressive colonial rule of the Japanese and our very own ‘Comrade Kim goes Flying’ which premiered at Toronto International Film Festival