In Moranbong District, Pyongyang; adjacent to the Arch of Triumph in between Kim Il Sung Stadium and Kaeson Youth Funfair at the former site of Pyongyang Public Ground.

The monument is 19.45 meters in width and 10.14 meters in height representing 14th October 1945 the date Kim Il Sung (aged 33) delivered his triumphal speech to the people of Pyongyang that the country was no longer under occupation. The mosaic is an idealised depiction of the young general’s first public appearance and public address just 4 days after the founding of the Workers’ Party of Korea). Of interest is that Russian Military were present in contemporary photographs of the time but are not shown in the mural.

A panoramic view split into thirds with only the leader Kim Il Sung set against the skyline. He is the centre of attention, shown wearing a Western-style suit – known as sebiro. The suit has iconographical significance representing the young general as a politician and a statesman, starting a new stage in the Korean revolution The design has the crowd beneath him on three sides, looking upwards, Almost all eyes are on him (a couple are looking round at the joy of others), all faces raised in adulation and joy.

Behind him on the podium, his comrades-in-arms wear the uniforms of the Guerilla Army, the heroes of the Anti-Japanese Revolutionary Struggle.  Note that through use of perspective those on the podium are still kept in a lower position to keep the focus on the leader.

The crowd cheering for Kim Il Sung represent Korean people from all walks of life; peasants, workers, students, commoners wearing traditional dress, and people in Western-style suits (representing the intellectuals) and in revolutionary suits – encapsulating the idea that the revolution was to embrace everyone from all walks of life. There are examples of women and men wearing the traditional costume chosonot which helps relate the mosaic to a particular time (the male traditional attire was replaced by round collared and buttoned up inminbok- peoples suit, and western style suits. 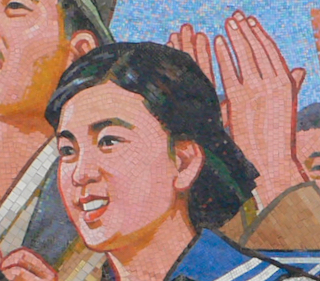 The banners are in Korean script (chosungul) and Hanja(Traditional Chinese characters incorporated into the Korean language with Korean pronunciation). Hanja was fully replaced in the DPRK by Chosungul in 1949. There is also political significance of using chosongul after the liberation from Japanese colonial rule (1910-1945) when using the Korean language and script were oppressed by the Japanese colonial authorities.