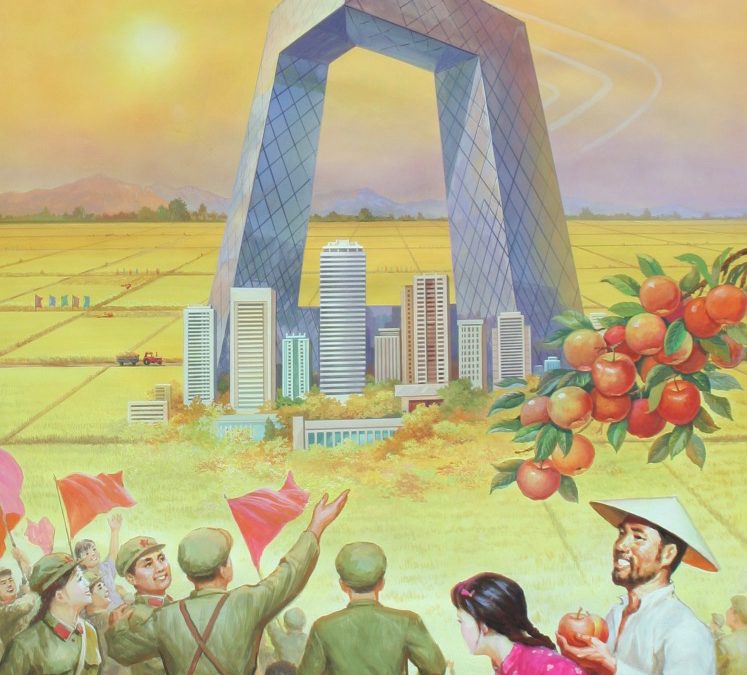 The Beautiful Future exhibition is a collection of eight paintings by a group of North Korean artists working in collaboration with a pair of British creatives, Nicholas Bonner and Dominic Johnson-Hill.

The show debuted in Caochangdi as part of Beijing Design Week 2013, before moving to Art Labor gallery in Shanghai, and then the Taipei Fine Arts Museum in Taiwan.

The images also became a huge hit in China where they were the top trending item for three days straight on Weibo (China’s Twitter, with more than 300 million active users).

“The results give an intriguing insight into the North Korean artists’ vision of what Chinese modernity might be like in a land they will never know.”

Nicholas Bonner of Koryo Studio and Dominic Johnson-Hill of Plastered 8, Beijing’s most famous streetwear brand, are both Brits with decades of experience in China to their name.

During that time the country they call home has changed at breakneck speed, with endless debate and discussion from around the world, which inspired the duo to explore the topic through a prism left untouched by all others — North Korea.

Thus, Bonner and Johnson-Hill sought to use their connections and creativity to provide a platform for North Korea’s oft-ignored artists to add their voice and unique outlook to the debate.

The Beautiful Future – An Imagined Beijing

Each of the eight pieces that make up The Beautiful Future were painted in Pyongyang, based on sketches by Bonner and Johnson-Hill, who provided the North Korean artists with ideas drawn from their time in China.

Together — over a period of two years — they created an imagined Beijing, where strong socialist traditions are sharply juxtaposed with present-day pleasures and symbols of China’s unprecedented development.

And so a group of outsiders with very different backgrounds combined to take a fresh look at China’s past, present, and future, with The Beautiful Future portraying a place lost in time — where socialism is both celebrated yet fits awkwardly with modern-day living.

With over 2,000 designers and five million spectators, the annual autumn Beijing Design week has become a massive event and has helped Beijing become recognized by UNESCO as being an ‘international design capital’. This is partly as the city fosters innovation and its efforts to become a ‘smart city’.

The first event was in 2009. Partly an experiment in turning the government’s top-down into a bottom-up platform for the designers, makers, curators, companies. It still seems to be largely going that way. It is sold as an initiative of various ministries but it is clear its success is due to an enormous amount of grassroots support from local and foreign designers living in the country. Many of the Creative Directors have been foreigners working closely with their Chinese creative colleagues. Teamwork works!

Not every year is seen as a great success. In 2013, the year, we exhibited the Beautiful Future, the event was a bit all over the place. Though, we came out of it well.

More on our exhibition in Quartz and the Atlantic.