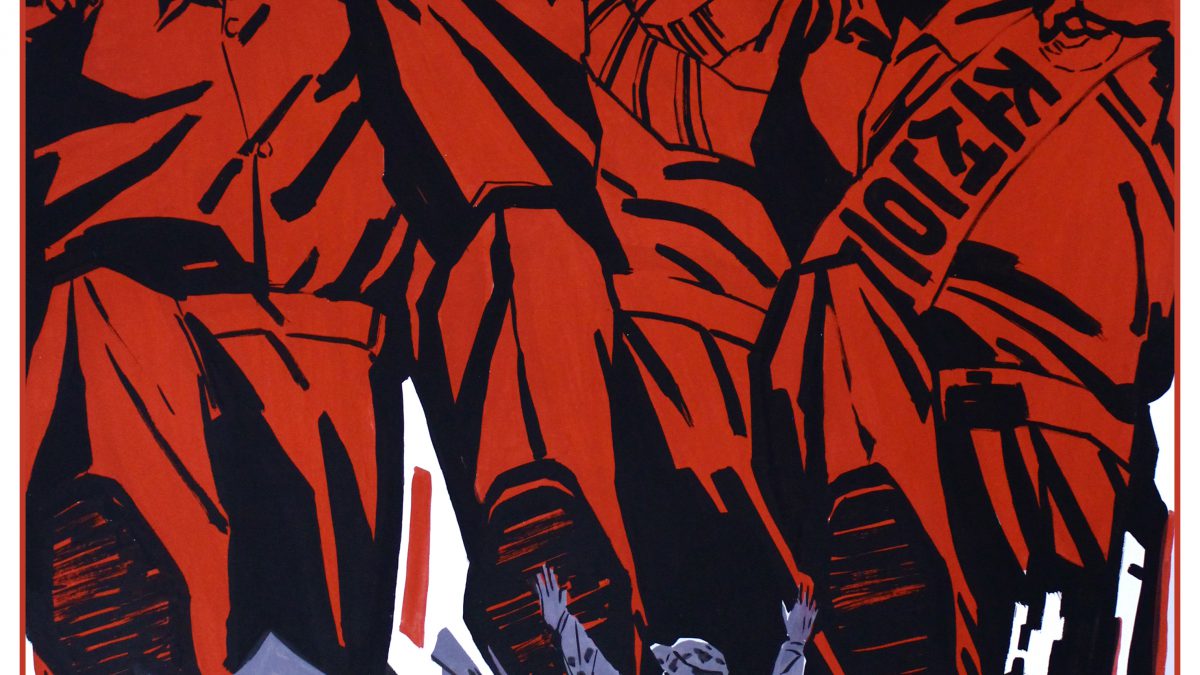 North Korean Propaganda: Sweep Away the Reactionary Group that Submits to Foreign Forces

Week 1: Sweep Away the Reactionary Group that Submits to Foreign Forces

Sweep Away the Reactionary Group that Submits to Foreign Forces

In this case, the US forces seen as illegally occupying South Korea.

What makes this North Korea propaganda art piece especially interesting is that the Korean men shown are not all from North Korea. The man in the middle is a North Korean, but the others are not.

On the left, a youth wears a headband that reads ‘National Unification’. In North Korean propaganda pictures South Korean student radicals are always shown with headbands on. This chap is from the ROK. The man on the right is an overseas Korean. He is part of the large diaspora population that can be found in China, the US, Central Asia, and all around the world. He is also wearing a sash that reads ‘Korea is One’.

The Americans being stomped on by this indomitable trio are surrounded by the detritus of their war machine. A missile is evident as well as documents that read ‘Against Reunification’, Hannara Party’. This is a former name of South Korea’s main conservative party, and ‘Anti-Republic’ (also not actually a slogan that anyone would wave around at all).

The soldier seen to be surrendering has the slogan ‘anti-reunification forces’ written on his back. This is obviously not the sort of thing one would actually have written or printed on clothes. It is just to make it even clearer (in case it wasn’t already!) that these enemies are seen to stand against the tide of reunification which the towering Korean figures espouse. 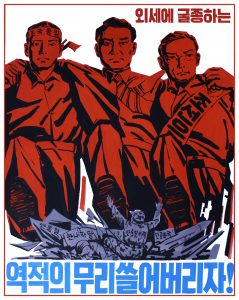 North Korean Propaganda: Sweep Away the Reactionary Group that Submits to Foreign Forces

This hand painted artwork was painted for Koryo Studio in Pyongyang, as a copy piece of an existing poster displayed in North Korea . It is painted in acrylic on heavyweight paper, it is 103 x 80cm and available for 500 EUR