In Autumn 2006, I started a project with one of the lesser-known Pyongyang art studios to produce a body of work about the railway in all its glory. From construction of locomotives to the running of the network.

The railway enjoys an elevated status inside North Korea, often portrayed in film, photography and art.

This would be the first time there was actually a focus on the industry and for it to be shown to the outside world. . . .  or so I thought!

The commission offered me an opportunity to work with various North Korean artists, understand and document their process and to have a body of work to which we can all relate.

The contract required 20 North Korean artists to embark on the project just as if it were a normal government commission.

This would involve a number of processes from sketch to completion of the work in the Studio. I requested that the artwork should be based on live observations and not simply around their experience or photographic records.

A selection of the sketches that gave the inspiration for the final artworks.

In Autumn 2006, the artists went ‘on-site’ for preparatory sketches around Pyongyang, the platforms, the passenger trains, the engineering sheds and even the construction of the Red Flag electric trains at the locomotive works. The artists developed various sketches (or incorporated various sketches to create one composition). I and the Studio heads would then select a number of sketches to develop and the artist would draw them up to full-sized works in the studio. Once artworks were selected, the artists would head back onto the streets to look for suitable candidates who represented the characters in their paintings. Not only people who work on the railways but members of the general public would be approached for ‘on the spot’ live drawing. For filling in details of minor characters artists might refer to their sketch work but also various ‘scrapbooks’ full of photographs or magazine cuttings of faces.

Example of scrap books compiled by the artist for reference

Example of separate sketches of main characters used in the final art piece. The initial water colour sketch has been divided into sections to aid in the enlargement of the final outline shown.

I flew to Pyongyang for a couple of critique sessions of the artworks as they developed. In October 2007, just over a year later, we had a beautiful set of completed works, over 30 pieces including oil, ink and linocuts.

The plan was to exhibit the work firstly in the UK and to include relevant pieces from Koryo Studio’s archive collection. We would include, film clips and photography, that would focus attention not only on the railway but also on the impact it has on North Korean society. The exhibition was to provide both visual and educational elements accessible to all ages and demographic- not just to those interested in rail but also to those curious about art, design and North Korea in general.

Example of the various stages of an artwork ‘At the Train Works’, sketch, pencil outline, completed work.

Tony Pletts, a great friend and designer was helping put together the pieces for this UK based exhibition. We sought advice from curators at the National Railway Museum in York, as well as the Victoria and Albert Museum, and discussed a possible venue as the platforms of Paddington station.

It was then that disaster struck.

DON’T COUNT YOUR CHICKENS BEFORE THEY HATCH

As with all art studios, the costs are agreed with the heads of the studio (never with the artist) but the final say is with the pricing commission. They check around for other similar projects (either inside or outside the country) and confirm if the cost of the project is correct or not. I had agreed on a reasonable price for the commission and had paid a deposit, all that was missing was paying the final amount and transporting the artworks to England. However, an email arrived stating that because of the USD 60,000 paid for an exhibition of North Korean art at the Museum of Applied Arts (MAK), Austria, the pricing commission declared that the price for our works would now increase dramatically. We hit an impasse, I was not going to pay more and the Koreans were not going to hand over the art or worse, my deposit.

The art simply disappeared, perhaps it was sold or possibly it still lies somewhere in storage.

This was not the last time this would happen: sometimes I will get round to telling the story of another commission we had on shipbuilding with Manusdae Art Studio. This one was even more sensitive and yet resulted in another financial loss. Not only was a body of work lost this time but to make matters even worse I was asked a few years later if I would like to buy some of the art I had originally commissioned!

Welcome to the wonderful world of art in the DPRK. 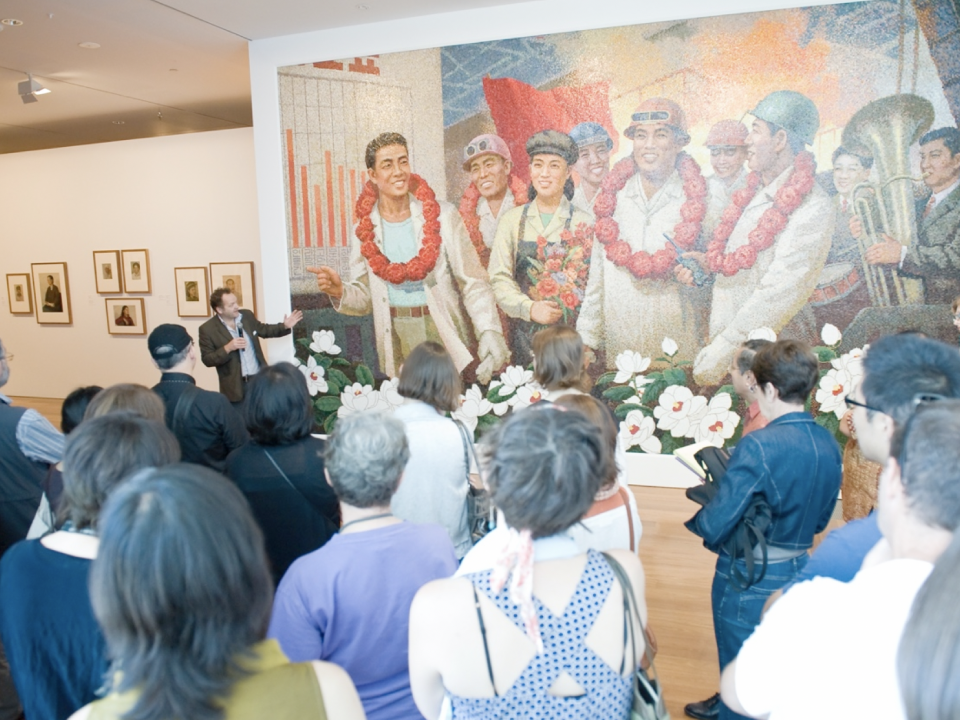