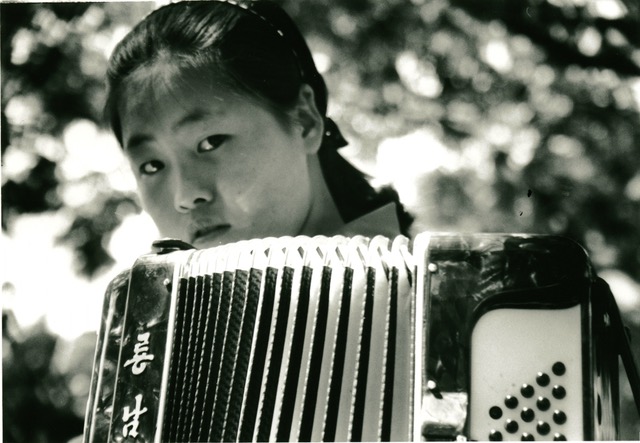 Accordions were introduced into North Korea most likely via Russia and are one of the most popular instruments, known to some even as “the people’s instrument”.

Relatively easy to master, it is a mobile orchestra packed into one instrument, loud enough to fill a room without amplification, portable enough to take to the fields for breaks during harvest.

There appear to be three factories in the DPRK making accordions; Un Bang Ul, which is the most famous one, as well as Yongyang and Ryong Nam San. The occasional imported model appears also, many dating from before the 1990’s, a time when there were more exchanges between Russia and other accordion-producing nations.

Different systems exist for the right-hand side of an accordion, which is normally used for playing the melody (while it can also play chords). The North Korean made accordions use the piano-style keyboard whilst there are also a few imported button layouts arranged in one way or another. Each system has different benefits and attributes according to those who prefer their own ways.

The following is a sequence of photographs showing how since our trips began we always seem to come across the instrument…the ubiquitous accordion in all its glory!

Schoolgirl who comes in for extracurricular group music lessons at the Mangyongdae Schoolchildren’s Palace. The instrument is the property of the Palace itself and has a red metal label which shows it was presented as a gift by one of the Leaders.

The child prodigies who reach the heady heights of mastering their instrument will perform a solo at the weekly performance of the Schoolchildren’s Palace to the applause of local kids and tourists.

But why have a solo when you can have a duo…. schoolchildren’s performance with the typical showboating of instruments, competing with a girl on a harmonica. The girl on the right is playing the button variation as opposed to keyboard version played by the boy on the left

Photograph from 2003 whilst filming ‘A State of Mind’. At home with the mother of the protagonist Hyon Sun with her own accordion. She would play whilst her daughter danced.

One from the family photo album – the sister of our other protagonist Song Yon (from ‘A State of Mind’) amongst school mates all slightly overshadowed by their adult-sized instruments.

A painting from the Koryo Studio Collection with the handsome accordionist getting all the admiration from those on board. The way the artists portrays the two young women eying up the performer is enough to inspire any young man to take up the instrument. Supposedly disgraced former-politician Jang Song Thaek was a rather good player and impressed a certain leader’s sister but that’s another story.

A 1981 linocut Going to a Congratulatory Performance by Kim Un Hui, 1981, kids performing to inspire the workers during the construction of the Juche Tower which was completed and opened in 1982.

With Affection linocut by Kim Kuk Po, 1992. The workers seen here are sending provisions to the army for the celebration of the ‘Sixtieth Anniversary of the Korean People’s Army Foundation’ (written on the boxes) while preparing an artistic performance for the soldiers.

And one from our collection by Hwang In Jae – a 2002 large linocut of a propaganda unit inspiring workers with song. We love the workers all coloured in revolutionary zeal red  (if there is such a tone?) no doubt off to over-fulfil some quote or campaign. We had just ten of these pieces made by Hwang In Jae, who was one of North Korea’s most talented and famous linocut artists. The lead singer has a red armband: Propaganda Artists

Our favourite North Korean troupe was not the famous Moranbong Band but the waitresses at the rest stop on the way to Kaesong. Sadly now disbanded (likely as they reached ‘the age to be married’ and have kids as is the norm in Korea) these young women were from the nearby town of Sariwon and would come to this rest stop for the day waiting for the occasional customer who was cruising down the usually-empty motorway. They rehearsed for their own entertainment but on one trip we heard them play and asked them to come out and perform. Since then they often made use of their fifteen minutes of fame in front of our tourists.

In 2015 we took photographer Matjaž Tančič on one of his several trips to take images of the country. He took two remarkable photographs of girls with accordions, the first was if Kang Hyon A. a 13 year old student with her 38 year old teacher Myong Ju at the little visited Kaesong Schoolchildren’s Palace.

The second was at the Chollima steelworks where he stepped into the cavernous building housing the furnaces and smelters and was hit with the noise of industry but also the sound of music being blasted out loud through speakers. He turned round and lo and behold against a wall there was a group of young women and an accordionist playing for the workers. This photograph of the light and delicate propaganda unit in contrast to the almost apocalyptic scene of dark faces, fierce noise, and flames was such a highlight of what was an amazing journey.

Because I have spent time writing this blog and just realised we have Matjaž’s work featuring accordions we will offer these prints with 10% discount.

They are still expensive but not when you look into the work that went into them, the cost of actually getting over to Korea and photographing, and the value of owning a unique and incredible piece of art. Support the arts and the artists! We are still working with Matjaž – a recent series on the Revolutionary Opera still yet to be published, so get them before he becomes an even bigger name in the photographic world!

A mosaic mural deep in the Pyongyang Metro portraying jolly workers heading out for a day’s harvest. The imagery of the man with the accordion is used to express the joy of team work rather ie farming is a fun social activity (such is socialist realism expressing only the good bits).

Ooh we love a foreigner on the accordion! The 2002 poster for the April Spring Friendship Festival held annually over Kim Il Sung’s birthday (April 15th). Guests and performers at this event are mainly performers from ex-soviet/non-aligned countries and anyone bringing in an accordion will be particularly welcomed – especially if they play something a little daring, something the Koreans have not heard before (ie anything other than folk, polka etc).

This is one of the posters we have in the Koryo Studio Collection and need we say more than the slogan: Dear Creators and Artists, Jump into the Boiling Reality!  We love the colouring in this poster, the accordionist in a bright casual outfit which you would rarely see in North Korea, the artist resplendent in grey official art studio jump suit and the cameraman sporting a cool revolutionary cap.

School girls in Kaesong practicing in the park. One instrument (the Convallaria brand) clearly an import from Italy.

A family snap form early 200’s – Tourists who have been to the co-operative farm on the outskirts of Wonsan will recognise this family as the ones who live in the house pen for foreigners to visit for a taste of daily life in this farm.

A performance at an orphanage for blind children in the countryside outside Pyongyang which we help support with our ongoing charity project Koryo Kids. They have a wonderful band with a slightly out-of-tune piano, but all played with gusto!

Another orphanage, also part of a project we help support. These young kids all have a nap in the afternoon and the accordion is a part of their musical life. If you want to support this charity please do contact us, but currently due to sanctions it is very difficult to provide direct help but we are holding funds for when it is once more possible. This will be very much needed and appreciated.

Finally, if you want some great accordion tracks from outside the DPRK click here！ 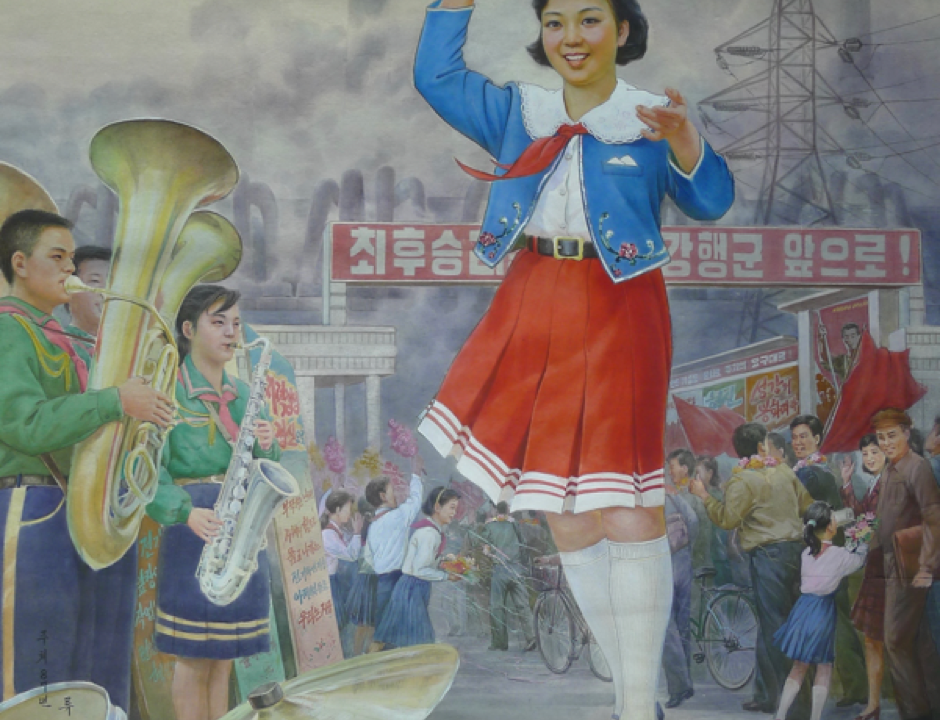 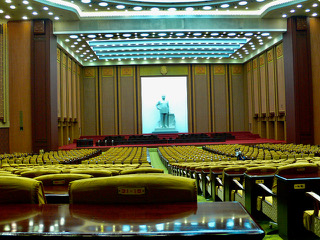 THE ART OF: Mansudae Assembly Hall