The Flower Girl; Over the mountains… are mountains

The most important piece of the ‘Five Great Revolutionary Operas’, The Flower Girl is also the most well-known.

Its film adaptation was highly popular in China during the Cultural Revolution and it was the first North Korean movie to win an international award.

The Flower Girl mosaic is one of the two mosaics on the front facade of Pyongyang Grand Theatre. It is the epic of the Korean revolution.

In the center of the mosaic is Kkoppun – the flower seller (seen as a symbol of Korean purity). She wears a simple version of the traditional Korean dress (choson-ot) and straw sandals (jipsin). Commoners and farmers traditionally wear this attire. She is holding a basket of flowers and a copy of ‘Peasants’ Friendship’ (농우). This is a pre-revolution socialist publication banned under the Japanese occupation (1910-1945).

Behind her is Chol Ryong, her brother and a guerrilla of the Korean People’s Revolutionary Army. He not only fought against the Japanese colonialists but also arranged a revolt amongst the peasants against the evil Korean landlord of their village. He is wearing traditional peasants’ clothing symbolizing his social class. That is one of the pillars of the revolution. Meanwhile, his red scarf and the rifle represent his membership in the guerrilla army.

The little girl is Kkoppun’s sister Sun Hui (in the story she is blinded by the evil landlady). She is holding a bunch of azalea flowers. These are symbolic as they were flowering in to welcome Kim Il Sung on return to his homeland in the springtime during the fight against the Japanese.

There is a great deal of symbolism in the characters in the mosaic, as mentioned above.

The surroundings are immediately recognizable to a Korean as the northern landscape of Korea. Perhaps the most symbolic of all is the round setting Sun, which lights the scene and the path on which Kkoppun is walking towards a brighter future. The setting sun is used in a symbolic way as Kim Il Sung is often referred to as ‘the Sun’. 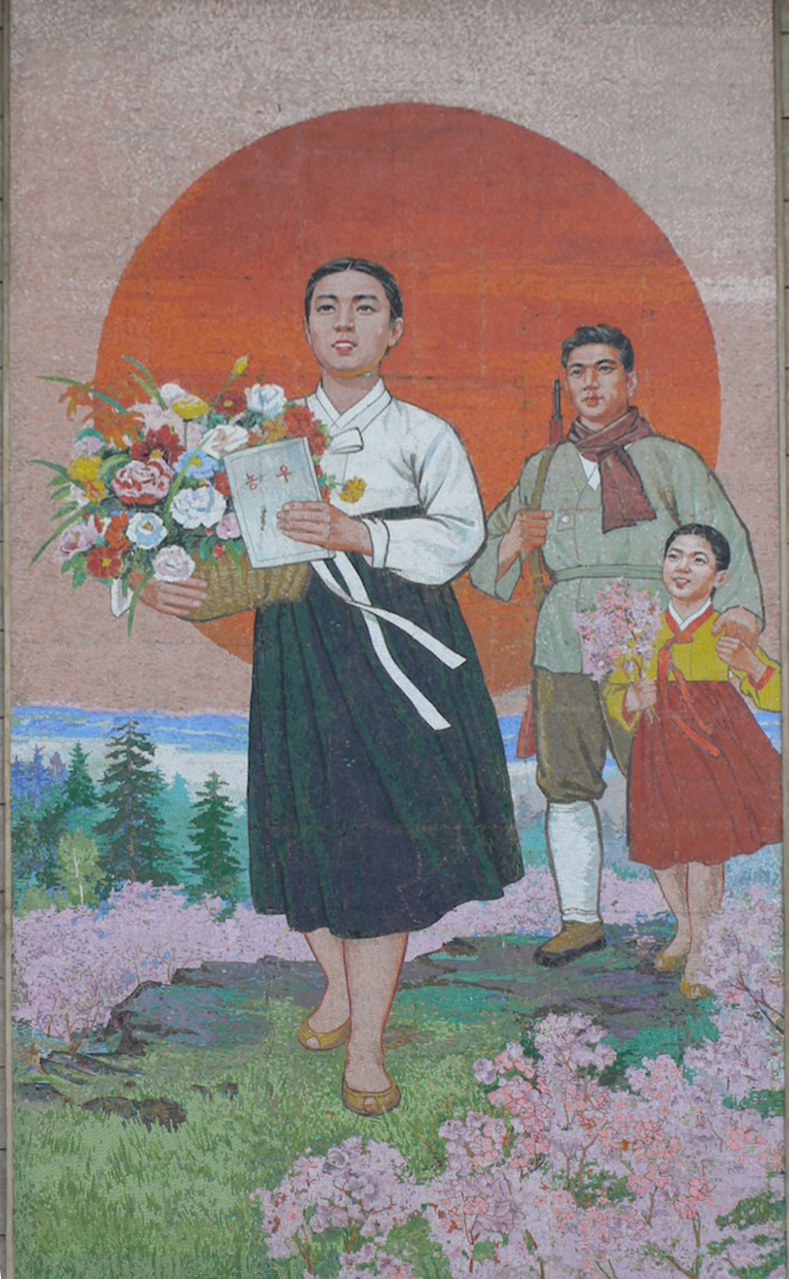 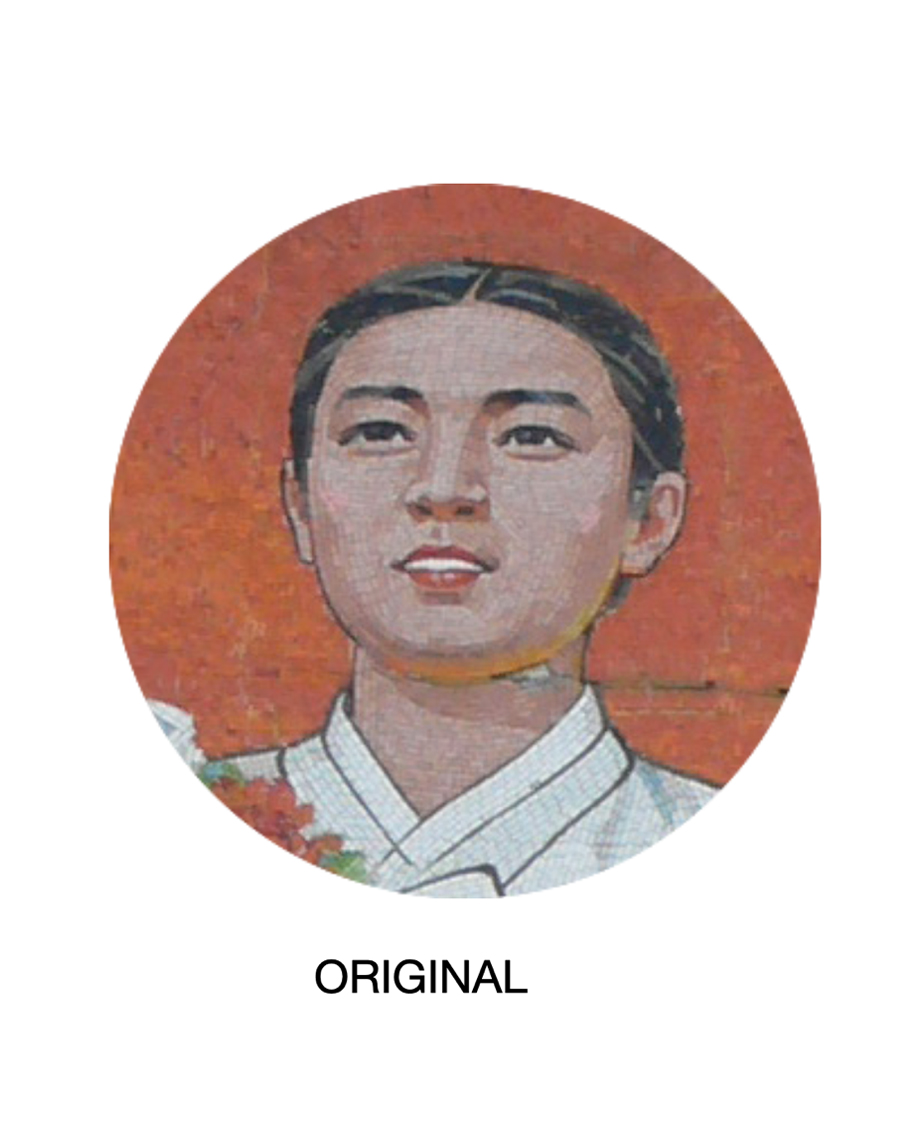 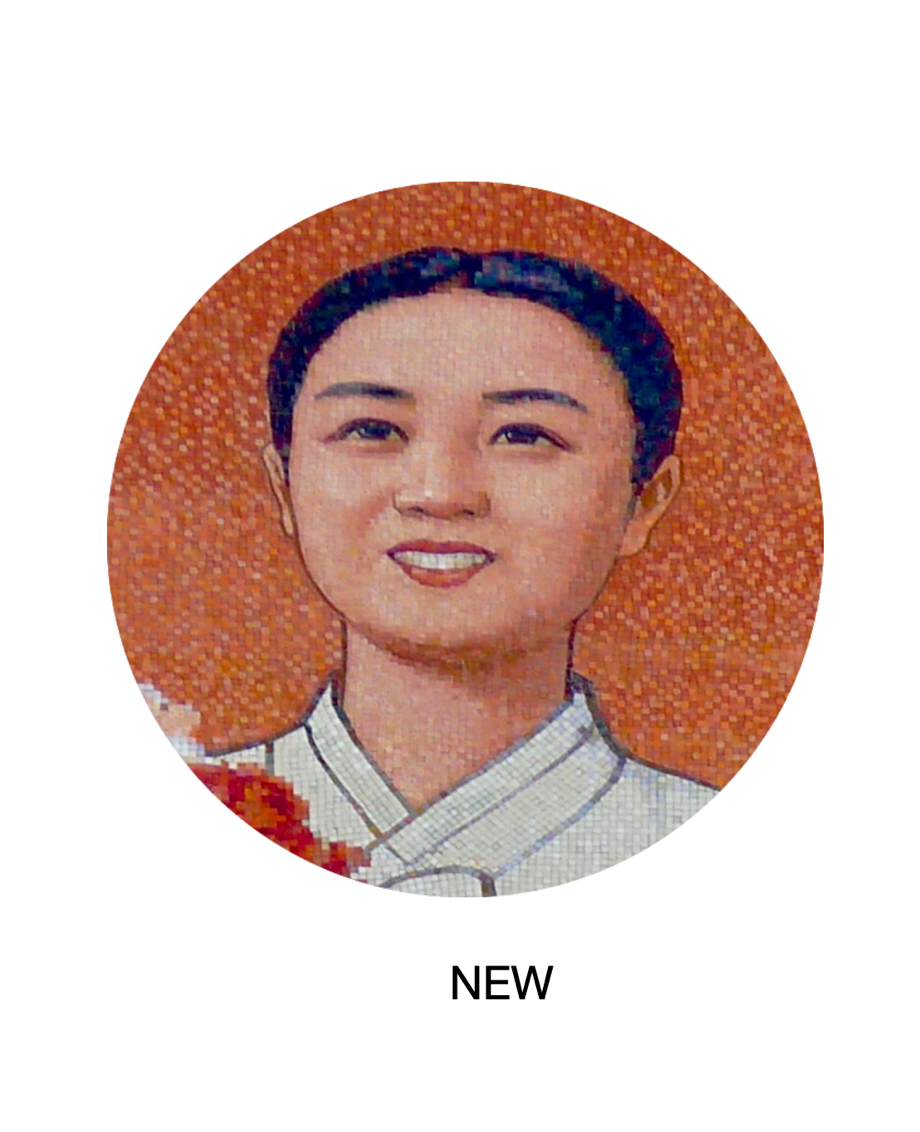 In 2011, they renovated the Grand Theatre. They replaced the original mosaic with a modern copy which, whilst brighter and more detailed, is in our opinion lacking the beauty of the former.

This is particularly noticeable in the original where Kkoppun’s expression is melancholy, yet filled with hope. Indeed, her gaze captures her strong belief in a brighter future.

The small mosaic tiles used in the face are larger like shaped tiles. Whereas the modern version used individual small tiles to build up more lifelike textures and tones (look at the teeth and eye sparkle).